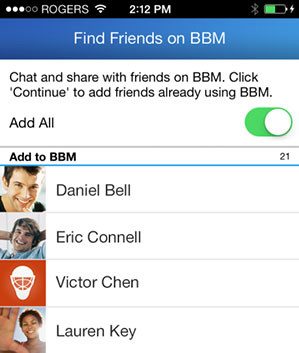 Those of you finding BBM extremely difficult use because it’s so hard to find other friends that use it can finally breathe a sigh of relief.

BlackBerry have updated their iOS and Android messaging app to include a “Find Friends” feature, something that’s been in the BlackBerry 10 version from the beginning. Once you receive the update, the Find Friends screen will automatically when you open BBM after updating it. From here, BBM Find Friends will detect which of your smartphone contacts have BBM on their device and let you know so that you can send an invite.

If you want to check for more contacts later on, you can find your BBM buddies under the ‘Invites’ pane in the app.

BlackBerry have also let us know that Version 2 of BBM will be coming soon – and is likely to bring BBM Voice and BBM Channels, making the BBM app a social hub as well as a messenger.