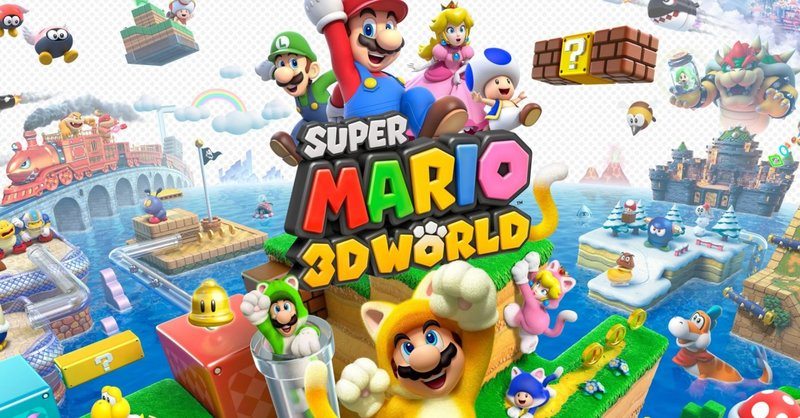 When we sit down to play a new Super Mario game on any console, we’re going to have big expectations. Mario has been the crown jewel in Nintendo’s roster of characters for so long, it’s hard to imagine a Nintendo without the moustachioed hero. Super Mario 3D World has a lot to live up to. 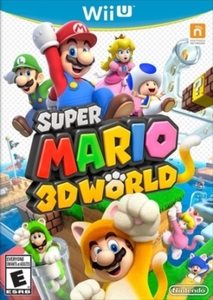 After playing Super Mario Galaxy, I couldn’t help but wonder where Super Mario 3D World would go next. Galaxy created an almost brand-new perspective on platformers much like Super Mario 64 did. It introduced so many new ideas and mind-bending level designs that it made other platformers look uninspired. This time, instead of looking forward, Nintendo decided to look back over Mario’s past games and create a mash-up of classic 2D and 3D adventuring. Gone are the circular levels and free-roaming exploration. In comes linear, time-limited levels. Just as in the very first Super Mario Bros game, Mario is essentially racing through each stage in a bid to reach the top of the flagpole in each stage.


The 3D aspect is kind of 2.5D instead now. You don’t have the option to manoeuvre your camera around Mario any more – or even set it to your point-of-view. Instead it’s fixed at an 45 degree angle. You can move it to the left and right a little, but that’s about it.

As you race through the levels, Mario can perform a number of acrobatic feats and new moves. The triple jump has been taken away for a vertical spin jump and forward roll. Two moves that I find myself rarely using. Mario’s power-ups come in a range of flavours: A Cat Suit for climbing up walls, a Tanooki Suit which allows you to float and spin, the Fire Flower and a Boomerang Suit as well as odd underused extras such as the Mega Mushroom, Goomba Suit, the Cannon Suit and the Question Block Suit. 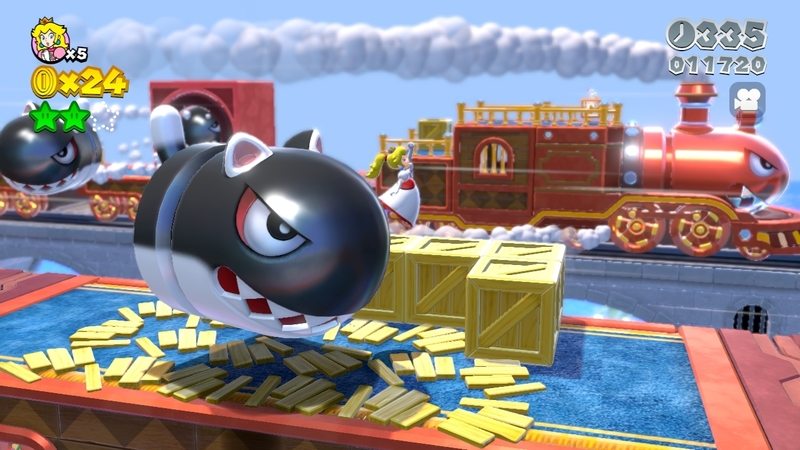 The Cat Suit is the major power-up in Super Mario 3D World – it allows you climb up any wall to find hidden areas. This usually means that any hidden area is high and out of sight, and you find yourself climbing up walls all the time because something might be up there. The air-dive that the cat introduces is also a mixed blessing. More often than not I found myself tapping the run button to get ready for a land only to see Mario dive away from the intended target and to his doom instead.

The boss battles in Mario are varied enough to be interesting but only a few pose a real challenge. The Koopa Kids are oddly the easiest ones to defeat, whereas I had more difficulty defeating one of the blockade enemies while I struggled to figure out how to defeat it. The battle with Bowser at the end of the game is also a lesson in frustration for the wrong reasons. Towards the end Bowser is in pursuit as Mario has to scale up the side of a tower. The problem is that this level is an auto-scroll sort, and you have to keep Mario hanging around the centre (or as I call it, the “Kill Zone”) because if you go too high you run the risk of going beyond the screen edge and falling to your doom. Which I did. Many times.

Despite these little problems, there is something intrinsically fun about playing Super Mario 3D World. Although retro, the game itself feels fresh and vibrant. A number of the levels are well designed to entertain as well as frustrate you. Especially the later levels which are infuriatingly difficult but sometimes so wacky that you can’t help but laugh at the same time. 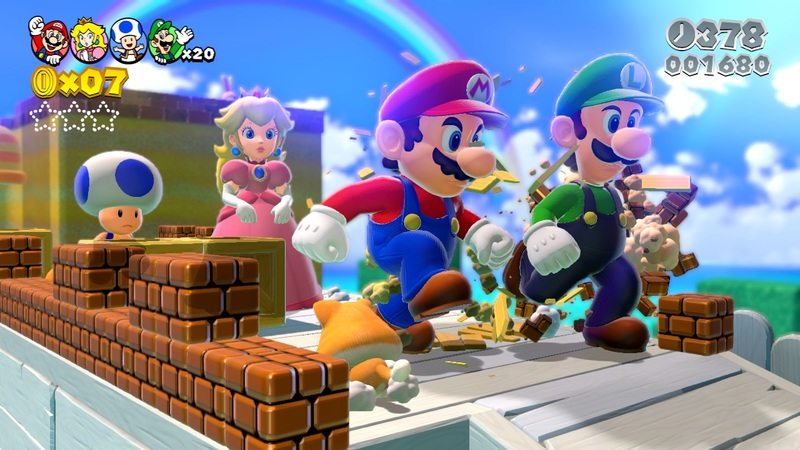 Super Mario 3D World also reintroduces the option to play as Mario or his friends on each level. Actually being able to play as Mario, Luigi, Peach and Toad means that you can choose the character that best suits your style of play. As devised in Super Mario Bros 2 – Mario is the all-rounder, Luigi jumps higher, Peach can float in mid-jump and Toad is faster. This matters very little to levels themselves but switching characters may make things slightly easier when you run into difficulties. 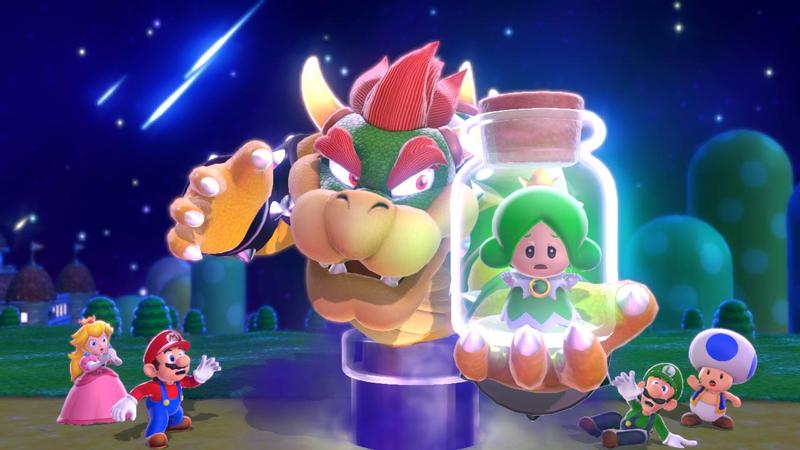 On top of this is the multi-player aspect. You and up to 3 friends can join in to play a ‘cooperative’ game. More power-ups are handed out as you share lives and race through together. I put the word ‘cooperative’ because Super Mario 3D World shows all of the player scores at the end of each level – and whoever wins starts the next level wearing a crown. Suddenly the cooperative aspect takes a turn as when you reach the end of a level you will probably find yourself picked up and mercilessly thrown off the edge to prevent you from finishing by your best buddy.

Beyond the multi-player, Nintendo has introduced a social aspect to Mario. You collect stamps in each level which you can use to post a doodle, message or collage at the end of each stage. At which point you’ll see messages from others such as “This game isn’t fun NEmore”, “Did it in 10 seconds – no powerups!”, “Where that 2nd star at?” and  “Mario the bestest!” Revisiting any finished level in Super Mario 3D World also lets to play alongside other ‘ghost’ players. Either race the fastest ghost or watch how they play in the hope of finding a hidden area of a level. I can see the appeal to a degree, but overall this element seems tacked on to the game. After becoming frustrated in the more frantic levels when you’re surrounded by three other Mii characters and being confused by where my character is, I turned it off. If you’re going to have a social aspect – why not challenge other players or play over the internet instead? There could have been more interaction to make it really engaging. 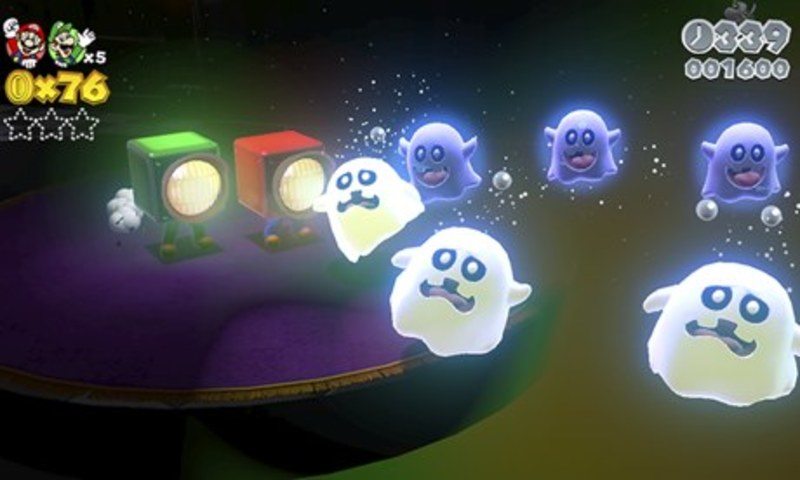 The difficulty seems to be pitched at j ust the right level. For less seasoned gamers, if you run out of lives all of the Toad houses and power-ups will be reopened. If a level proves too difficult you have the open of using an invincible Tanooki Suit. It won’t stop you falling off the levels – but if enemies are causing you trouble then this will help a lot.

When you put all of these elements together, Super Mario 3D World brings the fun to both gamers and more casual players. If you finish the game, there are some even more challenging levels to tackle. Complete the game with all the stamps, stars, and gold flagpole finishes and a final secret area is unlocked.

What this all comes down to is maybe a game that isn’t quite as ground-breaking as Super Mario Galaxy was on the Wii. Instead Super Mario 3D World brings together the best of 2D and 3D platform games to deliver something that is original, entertaining and bags of fun.