Transgender, “Tiffany” Moore, has emerged for the first time for an interview with a local new station after a video went viral of him/her getting into a dispute and threatening a GameStop employee for being “misgendered.”

Our previous article on the story details what happened when Moore became angry and aggressive at a GameStop employee for “misgendering” him/her when referring to Moore as “sir” rather than “ma’am.”

Even though virtually the entire internet is of the opinion that Moore’s behavior was out of order, he/she still doesn’t hesitate to call those who don’t agree as “bigots.”

Moore also admits that, “yeah, I could have reacted a whole lot better,” and then doubles down on the incident, “I wouldn’t change a single thing. I would do it 100,000 times again. I would kick over that display 100,000 times again. Because my actions were justified. I mean, it was blatant and malicious hate. It was blatant and malicious misgendering.”

Moore, apparently is also a rapper in the works of creating a music video (yikes!), and says the internet memes doesn’t concern him/her, and will continue to use this new found fame to spread his/her message.

Images have surfaced of showing that Moore has also been in and out of the slammer for various crimes which include fugitive arrest and robbery (a real winner). You can actually see the evolution from criminal to transgender in the picture collage below: 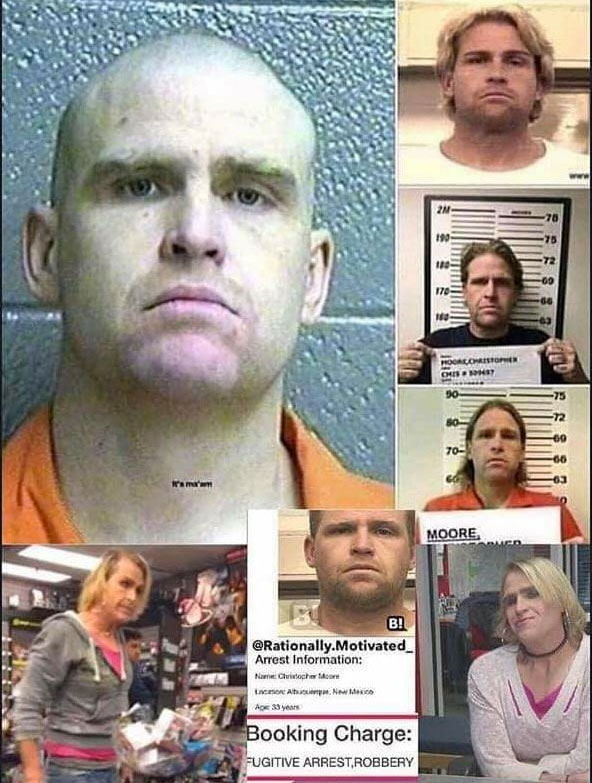 “We’re people just like you. We have kids. We have parents. We have brothers, sisters, aunts, uncles, cousins, we’re just trying to live,” said Moore.

Uh, I’d beg to differ. While being transgender is not a crime, and what you do in your own life is your business, being an aggressive criminal masquerading as a transgender isn’t the best way to convince others that you are “just like them.”

A GameStop spokesperson finally came out with a statement saying that the situation was “unfortunate,” but that the employee “acted professionally after mis-speaking by apologizing and remaining calm to de-escalate the situation.”

Watch the viral video of the incident that made it all happen: